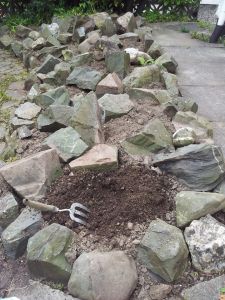 Afternoon!  The sun is blazing high here in my little part of the world and everyone is definitely making the most of the great weather.  It’s days like this that I realise how fortunate I am to live in such a green and beautiful place and makes me question why I am preparing to leave the wide open spaces for the smog and bustle of cramped city living.

Home to me is more about the memories I make with my loved ones and friends and I can take them with me, wherever I go in the world.  I’m lucky to know I’ll always be welcomed back and it’s a comforting thought that I am sure I’ll draw some strength from during testing times.

But I’m not away yet.  I just finished up working for a conservation charity and during my time there I got a real sense of how important it is for everyone to play their small part in protecting the planet.  Even the weakest mathematician knows that reduction in resources doesn’t equate to a positive result.

They’ve just launched a campaign called Giving Nature a Home with loads of ideas on how to easily create wildlife friendly habitats.  My mum recently celebrated her birthday and seeing as I’m now living on a shoestring I decided to take part in the campaign and give her a present I know will bring her a lot of joy far beyond her birthday.

I had my eyes opened when it comes to weeding!  Having asked me to weed the garden for the past two decades I finally relented and made a bit of use of my limbs and got cracking – just shows how a mother’s persistence will eventually pay off!   I could not believe that such a small area could take so long to clear – or have such a knackering effect on my entire body! – but I have to admit I felt a real sense of pride once I had completed it.

Then the exciting part: the planting!  Now I’m not much of a gardener but by the time I was finished I felt I could pose a legitimate threat to Alan Titchmarsh.  I sought advice from local garden centres and green-fingered gurus and picked up some terrific plants guaranteed to attract bees, ladybirds and butterflies to our garden.  I didn’t have to wait very long for them to appear – before I reached the far end of the rockery before bees were congregating around the primulas for a feed.

I’m really excited to see the garden flourish and become a hub for wildlife but beyond that I know that the garden will bring so much joy to my family in years to come allowing them a front row seat to a daily nature show.

Mum was delighted with her present so now it’s a case of fingers crossed the plants thrive!  Must dig out that watering can just to be on the safe side…

Follow Tales of adventure on WordPress.com
Join 1,345 other subscribers